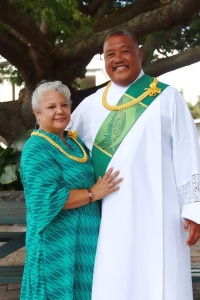 Deacon Bambi was ordained on January 20, 2018 at Immaculate Conception Church, one of 10 in the 8th Diaconate Class.

Holy Cross had been their parish for nearly 30 years, and after his ordination, Deacon Bambi was assigned to Holy Cross Parish until his assignment here at St. Theresa Parish.

Deacon Bambi graduated from St. Theresa School in 1979 in a class of 29 students, growing up in Kekaha with a love for music and surfing!

He and Clarissa met at Waimea High School as freshman, and have been sweethearts ever since.  They were married in 1983, and recently celebrated their 37th wedding anniversary.

As his lovely wife, Clarissa says, “Not all of us can do great things, but we can do small things with great love!!” (St. Teresa of Calcutta) 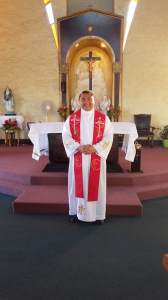 Ordained on Jan. 3, 2015 in his home parish church of St. Joseph, Waipahu on the 175th anniversary of the birth of St. Damien deVeuster.

Fr. Edwin is a former Polynesian dancer and flight attendant and was the first local man ordained for the Philippine province of the La Salette order. Fr. Edwin is a 1983 graduate of Waipahu High School.

The desire came back in his late 30s, he said, when St. Joseph Parish was visited by the La Salette vocations director from the Philippines.

“I felt that God was calling me again,” Fr. Edwin said. “I needed to find out.”

He applied to the congregation in 2005 on his 40th birthday and was accepted.  He was invited to visit the seminary in the Philippines for a week to get a feel for the religious life.

Fr. Edwin said that by the time the visit was through, he knew “this is where I wanted to be.”

He was 42 when he left for the seminary in the Philippines.

“It was a big decision. I had to leave my job, my family, my country,” he said. “The schooling was in English, so that was not so bad.”

And the food was “not a problem” for the Hawaii-raised Filipino.

Fr. Edwin is the son of the late Frank Conselva and Flavia Salvador. He is the seventh of eight children, five boys and three girls, all of whom live in Hawaii.

Prior to his airlines job, Fr. Edwin worked as a dancer with Paradise Cove Luau for 14 years, performing Hawaiian, Samoan and Tahitian dances. Before that he was the assistant manager at Arby’s in Pearl Ridge.

He was also a member of the hula halau Na Wai Eha O Puna, later called Ke Kai of Kahiki, for more than 20 years.

Asked by the Hawaii Catholic Herald in January 2015 what he would advise others considering a similar “late” path to the priesthood, Fr. Edwin said, “If you feel that God is calling you, it is never too late. Answer the call. You never know. Things do happen in God’s time.”  (excerpts from HCH 1/2/15) 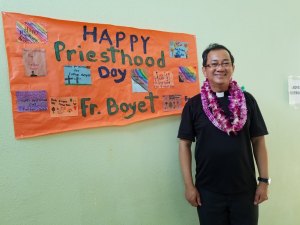 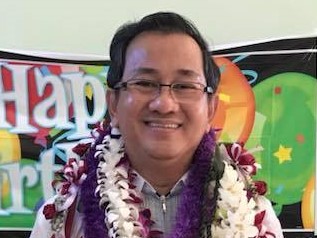 Fr. Boyet was born in Davao City, Philippines and has served in Hawaii since September 2014.

Before transferring to Kauai, Fr. Boyet was the Associate pastor at St. Michael Parish, Kailua-Kona, Hawaii

Other:
Before all Masses or by appointment.